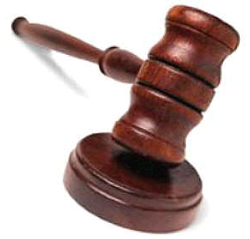 When we are at debates or conduct a formal business meeting, we follow Robert's Rules of Order.

General Procedures
A meeting wouldn’t be a meeting without some general rules of procedure and decorum. Robert’s Rules, of course, have many of these. We have tried to whittle them down to what we think would be most useful for most chapter meetings. Although the rules may seem at times to be trivial or nitpicky or downright weird, they are essentially just a way of ensuring fairness and common courtesy to all members of the meeting.

Getting to Speak
When you have something to say, you have to be recognized by the chair. According to Robert’s Rules, this is done by standing up and addressing the chair. Now this may a bit too formal for many occasions and, admittedly, a few people shouting “Mr. President” every few minutes gets really annoying. So many chapters (and traditionally the national convention) have been a bit less formal and fallen back on simply raising hands to get recognized. If the chair then calls on you, you may speak.

As a common courtesy (and according to the Rules), you should never seek recognition while someone else is talking. There’s nothing more frustrating than trying to get a point across while a dozen people have their hand in the air and are trying so hard to get the chair’s attention that they are not paying attention to anything being said. Be polite and wait until they are finished. There are a few instances when it is acceptable to interrupt someone or speak without gaining recognition by the chair, such as when making a point of order or a point of information, but these are pretty rare.

Members who have not yet spoken about the topic at hand always have priority over those who have. According to the Rules, each member can only speak twice on any given topic (note: the standing rules of the national convention actually allow each person to speak only once). Additionally, the chair is obliged to try and alternate recognizing those who are for and against the motion being discussed. For example, if someone just spoke against a motion the chair would say something like “Is there anyone who wishes to speak in favor of the motion?” and then recognize someone.

Speaking
After you’ve been recognized, you may then speak. It’s best to start by addressing the chair with their title, but again this may be a bit formal for chapter meetings. Always address your comments to the chair, even if they involve another member. This keeps debate from becoming personal. When referring to other members, use their title and not their name (i.e., “Brother Smith”, or “The delegate from Andronicus.”) Using someone’s first name implies a level of friendship that may not be appropriate when some of the members present may not know each other very well.

When speaking, you may speak only on the merits of the topic immediately at hand.
Anything off the topic is out of order, and you can be made to stop talking if someone points it out. You may speak only a certain amount of time on any given topic. Robert’s Rules allows for

10 minutes, the standing rules of convention allow for 2 minutes. Your chapter should have standing rules regarding both how long and how many times members get to talk on any one topic, unless you want to use Robert’s standards.Situations

This is a quick guide listing common situations you may find yourself in and how to deal with them.

I want to change the wording of the motion we are discussing.
o Move to amend the motion and state your change specifically.
 You must be recognized by the chair.
 Requires a second.
 Is debatable.
 Requires a simple majority to pass.

I think discussion should continue, but I don’t want it to go on all day.
o Move to limit debate, and state specifically how you want to limit it.
 You must be recognized by the chair.
 Requires a second.
 Is not debatable.
 Requires a 2/3 majority to pass.

I want the chair to enforce rules about time limits and the number of times people are allowed to speak.
o Make a point of order and then point out the rules being violated. The chair is then obliged to enforce the rules.

 Can be made at any time, even when someone is speaking.

The chair has been enforcing rules about time limits and the number of times people are allowed to speak, but I really think we need to discuss this more.
o Move to extend debate and state specifically how you want to extend it.
 You must be recognized by the chair.
 Requires a second.
 Is not debatable.
 Requires a 2/3 majority to pass.

This motion needs more attention/investigation/discussion than we can give it today.
o Move to refer the motion to committee, then give the specifics of the committee and when and how you want them to report on the matter.

I need a bathroom break.
o Move to recess and state for how long or give a time you want to reconvene.
 You must be recognized by the chair.
 Requires a second.
 Is not debatable.
 Requires a simple majority to pass.

I want to motion to do something, but I’m not sure how to do it or if it is in order right now.
o Make a parliamentary inquiry and explain what you want to do to the chair, who should then tell you the proper manner in which to do it.

 Can be made at any time, as long as no one is speaking.
 After the chair explains, you do not have the right to immediately make the motion. You must wait until the chair recognizes you in the normal fashion.

I have a question for the person who is speaking.
o Don’t interrupt, it’s not nice. Technically, Robert’s Rules allows for you make a point of information and interrupt a speaker by saying, “Will the speaker yield to a question?” The speaker can then choose to let you ask the question or not. But since both the question and the answer will count towards to speaker’s time limit, it is very impolite to use this in situations with extremely strict time limits (like at the national convention). In this case, it is best to wait until the speaker is done and then address the chair with your point of inquiry, who then has the right to decide whether or not to allow it.

I have a question for the maker of the motion or someone who has already spoken.
o Make a point of information, and ask the chair if they will allow a question to so- and-so. If the chair allows it, direct your question through the chair to the person. Never address the person directly.

 Can be made at any time, as long as no one is speaking.
 The chair has the right to decide whether or not to allow the question.

I made a motion and now I think it’s dumb.
o Ask permission to withdraw the motion.
 Can be made at any time, though it is polite to wait until someone is done speaking.
 The chair asks if there are any objections to the motion being withdrawn.

If no one objects, the motion is immediately withdrawn. If there is an objection, the request to withdraw becomes a motion which must be seconded, is not debatable, and requires a simple majority to pass.