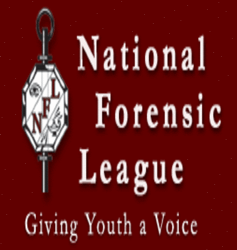 The word "forensic" is an adjective meaning "of public debate or argument." The word is derived from the Latin word forensis, meaning "of the forum."

The National Forensic League is a non-partisan, non-profit educational honor society established to encourage and motivate American high school students to participate in and become proficient in public speaking. NFL is the America's oldest and largest high school speech and debate honor society. Since 1925, NFL has enrolled over 1.3 million students in fulfillment of its motto, "training youth for leadership."

The organization is the central agent for coordination and facilitation of heightened public awareness of the value of speech communication skills, development of educational initiatives for student and teacher training, excellence in interscholastic competition, and the promotion of honor society ideals.

The National Forensic League believes that all students should be empowered to become effective communicators, ethical individuals, critical thinkers, and leaders in a democratic society. We exist to promote secondary school speech and debate activities and interscholastic competition as a means to develop a student’s lifelong skills and values and to increase the public’s awareness of the value of speech, debate and communication education.

Members of the National Forensic League are expected to abide by the NFL Code of Honor, adopted on September 23, 2007.

"As a member of the National Forensic League, I pledge to uphold the highest standards of integrity, humility, respect, leadership and service in the pursuit of excellence."

Integrity: An NFL member obeys the highest ethical standards and adheres to the rules of the League. NFL members recognize that integrity is central to earning the trust, respect, and support of one's peers. Integrity encompasses the highest regard for honesty, civility, justice and fairness.

Humility: An NFL member does not regard him or herself more highly than others. Regardless of a person's level of success, he or she always looks beyond oneself to appreciate the inherent value of others.

Respect: An NFL member respects individual differences and fosters diversity. He or she promotes tolerance, inclusion and empowerment for people from a variety of backgrounds.

Leadership: An NFL member influences others to take positive action toward productive change. NFL members commit to thoughtful and responsible leadership which promotes the other core values in the NFL Code of Honor.

Service: An NFL member exercises the talents he or she has been given to provide service to his or her peers, community, and the League. At all times an NFL member is prepared to work constructively to improve the lives of others.